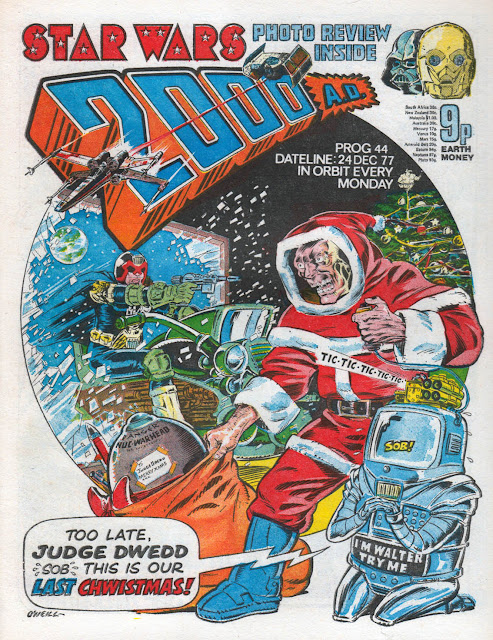 In its early days, 2000AD was full of raw energy and action, with direct, no-nonsense scripts aimed at 8 to 12 year old boys. It's a more sophisticated and mature publication today, having grown with its audience, but it still has the same attitude and it's still a good buy.

Prog 44 in December 1977 was 2000AD's first Christmas issue. No extra pages for the occasion like it's had for the last 15 years, this one was in the regular 32 page format. Unlike the festive-filled humour comics, UK adventure comics were not usually full of seasonal themes. However, this issue did sport a great Santa cover by Kevin O'Neill, related to the Christmas Judge Dredd strip by John Wagner and Mike McMahon... 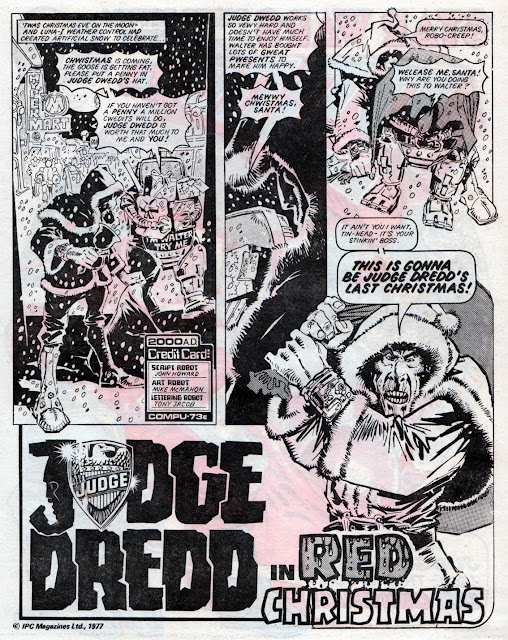 Back then, Dredd had moments of being more easy going, as the following page demonstrates. It's a far bleaker world in Mega City One these days... 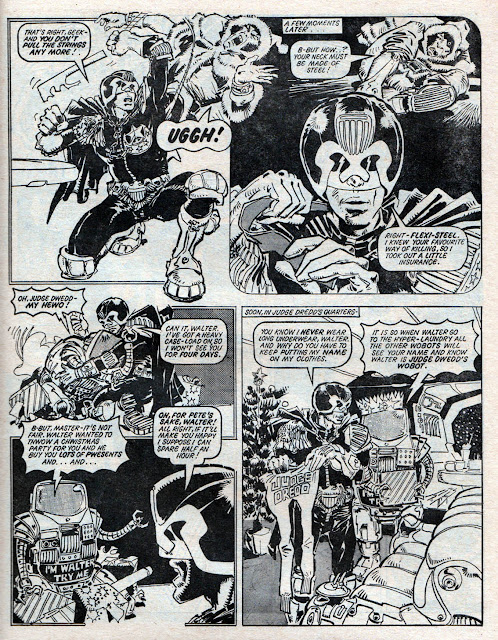 The rest of the strips didn't feature a Christmas theme but they're worth noting. In recent years, Bill Savage has been revived in 2000AD but here he is back in his first series, Invasion, with gritty art by Mike Dorey... 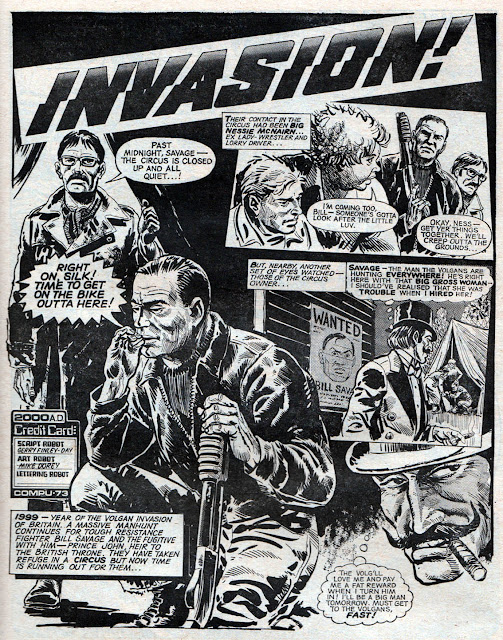 It may be hard for some to imagine a time when Star Wars was new, but 1977 saw its first release. (I remember going with a bunch of mates to see it at The Palace cinema in Nuneaton when I was 18. A picture place long since demolished.) Here, 2000AD gives it a brief 'review'. The photos aren't great, due to the cheap newsprint the comic used back then, but I'm sure it's of interest to Star  Wars collectors... 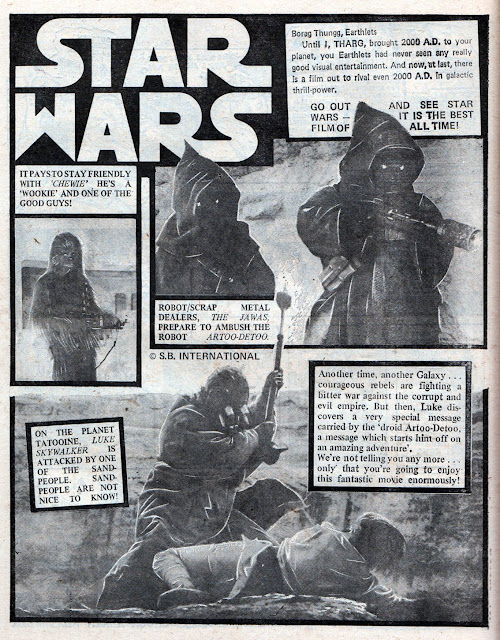 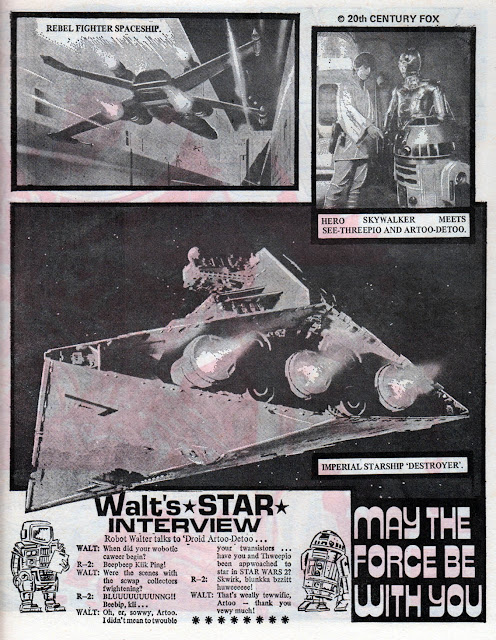 2000AD had a regular humour page in those days, ably filled with Bonjo From Beyond the Stars by the brilliant Kevin O'Neill... M.A.C.H. 1 was 2000AD's version of TV's The Six Million Dollar Man, but proved to be far more interesting than its inspiration. Art by Ramon Sola... 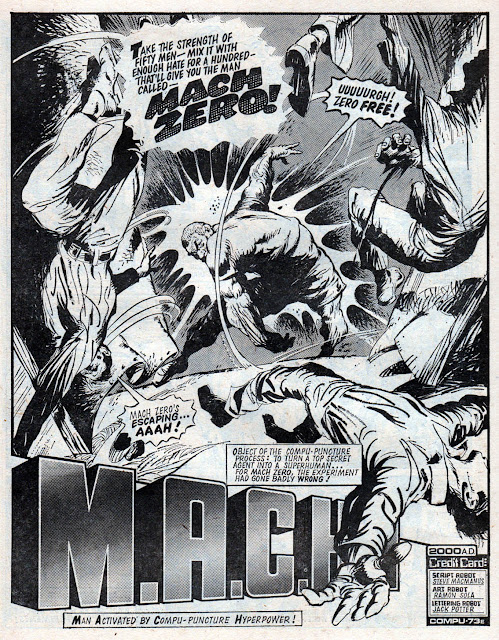 Colour was limited to the covers and centrespread back then, with Dan Dare taking up residence (soon to be replaced in that position by Judge Dredd). Stunning art from Dave Gibbons... 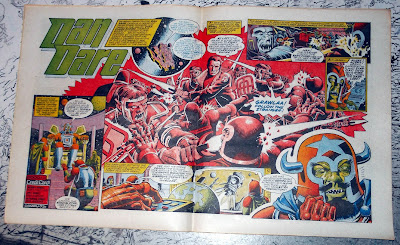 1977 also saw the first 2000AD Annual published. Here's an ad for it, along with an ad for other IPC comics. The annual ceased publication years ago but these days there's the 100 page Christmas issue instead which makes up for it. 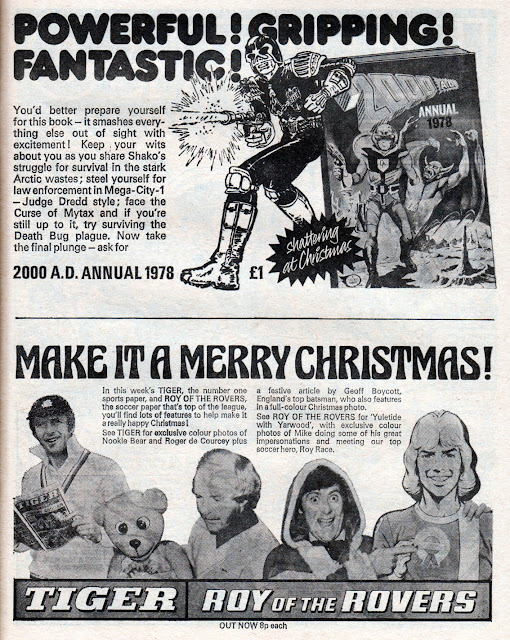 IPC's adventure comics were expected to have a sports strip back in those days and Inferno fitted the bill. This is the back page, with art by Massimo Bellardinelli. 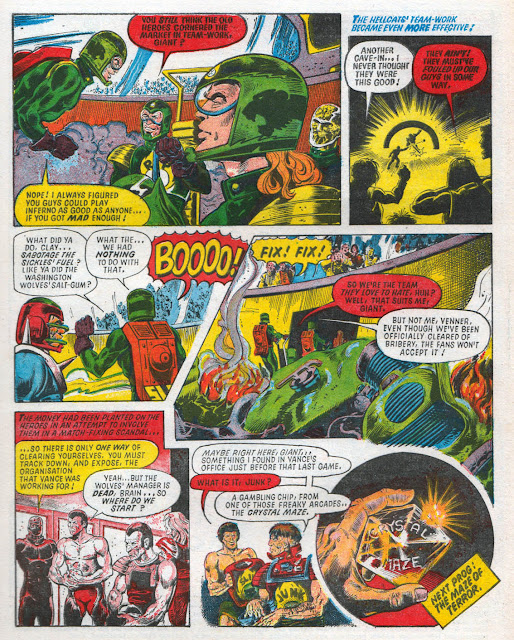 2000AD is still around today of course, published every Wednesday. This year's Christmas issue will be out on December 16th.
Posted by Lew Stringer at 00:01

And of course, O'Neill was a member of the art staff at that point - meaning he was near at hand when the editor suddenly remembered he needed a Christmas cover at short notice.

Nice walk through of that Prog Lew, great to see that cover again.

It's amazing to think that in those days we had to wait months for Star Wars to come to the UK - I didn't see it till May 30th 1978 which was just over a year since its' original U.S. debut. In fact I'd read the Marvel adaptation in Star Wars Weekly before I saw the film - actually I'd only read half of Marvel's adaptation as I stopped getting SW Weekly at #6. I didn't think much of the Marvel version, thankfully the actual film was a lot better.

Eek. Much as I enjoyed Bonjo as a young 'un, its Chinese imagery is pretty hideous- the story reproduced in the 1984 2000ad annual was an even worse offender from what I recall. This isn't a dig at Kevin O'Neill of course, just shock at how culturally bloody clueless the UK mainstream continued to be about east Asia even as we were slowly waking up to the evils of other racial prejudices. I'm not sure the frankly bizarre notion they'd be singing Christmas carols in a formerly Taoist/Confucianist/Buddhist country under atheist Communist rule would've even struck the average UK reader as particularly incongruous in 1977!

Good to see the Star Wars preview as 2000ad approaches its first anniversary, though. Scotches the pervasive '2000ad was a SW rip off" myth :-)

Do some people really think 2000AD ripped off Star Wars? It came out months before the film. Just a happy coincidence that it was soon able to ride the wave of the new interest in sci-fi.

As for the stereotypes, yeah, this was at a time when even worse things were frequently on TV. In that context Kev's work looks very tame.

Sorry, think I meant "cash in" rather than "rip off".