London-based Titan Comics certainly turn out a lot of Doctor Who comics these days. There are now separate series for the 8th through to 12th Doctors, with a new series for the 4th Doctor starting next year. This latest issue of their 12th Doctor series (No.16) is also labelled the 2015 Holiday Special with a suitably seasonal complete tale.

Yes, despite this being a British comic, it's called a Holiday Special rather than a Christmas Special. Presumably because the comic is distributed to American comic stores as well as UK comic shops. Make no mistake though that this is most definitely worth including under the Christmas-themed comics I've been covering on this blog this month. 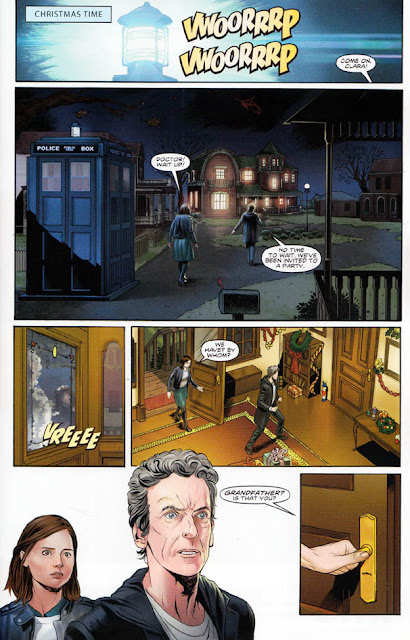 On TV, the Christmas Doctor Who episodes are usually good upbeat romps, and this comic follows that tone. Written by George Mann and Cavan Scott, the 28 page story Relative Dimensions is a fast-paced, fantastically enjoyable adventure for the 12th Doctor and Clara, with some surprising guest stars. 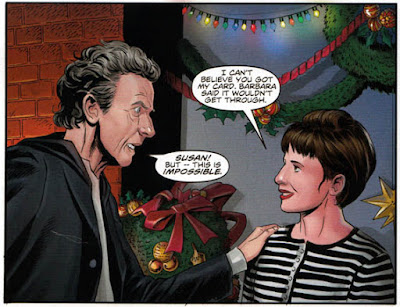 The artwork by Mariano Laclaustra is a delight to see. The script takes quite a few twists and turns and Mariano is called upon to depict various scenes and figures but handles it admirably.

I won't reveal the plot for you as you'll enjoy it more without any spoilers. Suffice to say this is a great fun read for all ages and worth checking out.

Doctor Who: The Twelfth Doctor No.16 (2015 Holiday Special) is $3.99 (about £3.15) and available from comic speciality shops such as Forbidden Planet, and online sellers.

UPDATE: There will be a newsstand edition of this story in a 76 page comic alongside two chapters of a Ninth Doctor story in Tales from the Tardis: Doctor Who, on sale this Thursday, 17th December. Available in WH Smith and selected newsagents. My thanks to James Spiring for the information. More details here:
http://titanmagazines.com/t/souvenir-one-shots/uk/tales-from-the-tardis-doctor-who/1/ 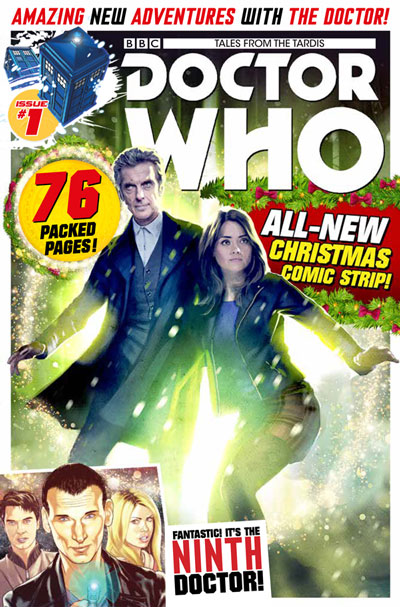 This is getting a UK reprint immediately. A new spin off title from Doctor Who Comic, called Tales from the TARDIS, will feature this and the first two parts of a Ninth Doctor story called Weapons of Past Destruction. Out on Thursday.

Thanks James! Well spotted. I'll update my post with that cover shortly.

Oh drat ! Wish I'd known about the UK reprint before I downloaded the US edition from Comixology.

The shelves are getting rather crowded with Doctor Who titles if Tales From The TARDIS is going to be an ongoing comic.

Same here. I bought the special from an eBay seller, not knowing there'd be a newsstand edition. Never mind. At least 'Tales from the TARDIS' features two 9th Doctor episodes too. I'm guessing it'll either be bi-monthly or a one off but time will tell.

Yes, the comics and SF mag section in Smiths is getting very packed, especially with Doctor Who titles. I fear shops might start cutting back soon. My local branch hasn't stocked Doctor Who Magazine this month, despite it always being a good seller.

To be fair guys, Titan seem to have sprung this on us last minute. It wasn't even advertised in the most recent issue of Doctor Who Comic. For that reason, I think, unfortunately, the sales will be low simply because of lack of publicity. And I wonder if shops will remove the current DWC, thinking this is yet another relaunch of it, when in fact DWC vol 2 issue 3 should still be on sale for another fortnight?

I found out about it from Gallifrey Base, where someone had posted a link to Forbidden Planet. FP (which lists the first three issues) reckons it's four weekly like DWC, but I doubt that as they'd catch up with the US after issue 2.

Titan do seem to be rushing out a lot of comics recently; Flash, Green Arrow, Supergirl, and now this. Smiths aren't expanding the shelf room for comics so the displays are very crowded now with titles hidden behind each other. It's nice to see so many comics in the shops but if potential buyers can't see them clearly I do wonder how they can attract passing customers.

Seems like the new title is ongoing as they advertise issue 2 at the back on the comic as being out on 14th January. Shouldn't catch up tho - 9th Doctor is now an ongoing title too, to add to 10th, 11th and 12th....and 4th coming too, so plenty to reprint

Bought the newsstand edition, the inside back cover has some news. Doctor Who Comic will no longer be running the Tenth Doctor stories, they'll be in Tales from the Tardis now instead. That decision must have happened after DWC vol 2 issue 3 went to press - they really did make this decision on a whim. Tales from the Tardis is indeed monthly. Also, TFTT 2 is a 100 pager.

Thanks Steve and James. Yes, sounds like the decision to publish it was made fairly quickly. It's a nice production though and the notable thing is that the newsstand edition has some differences to the other version. The artwork isn't cropped (as it was on some pages of the first version) and the lettering has been improved and is more dynamic where needed. Comicraft are still credited with the lettering on both versions, but the newsstand 'Tales from the TARDIS' edition is better.