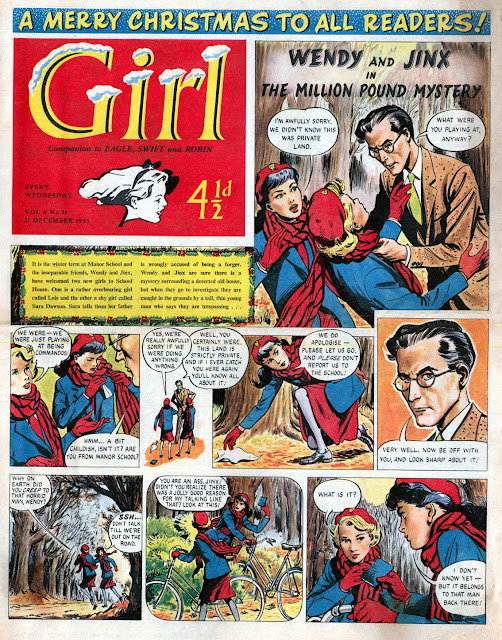 One of the companion comics to Eagle, Hulton Press' Girl set out to offer the same mixture of intriguing stories and educational features as its fellow publications. Where Eagle was billed as a boy's paper, Girl was obviously pitched towards schoolgirls. As this was the 1950s there was a slant towards needlework, cookery, and stories about ballet and nursing. That said, Girl also featured characters in adventure settings just as Eagle did, and its heroines were just as resourceful, independent, and brave as their male counterparts.

Let's look at a few pages from the Christmas issue that was published 60 years ago this week, dated 21st December 1955. Unlike most of its rivals, Girl published full creator credits so there's no problem identifying who did the strips.

The cover strip (above) is Wendy and Jinx. Script by Stephen James, art by Ray Bailey and Philip Townsend. It continues onto page two... 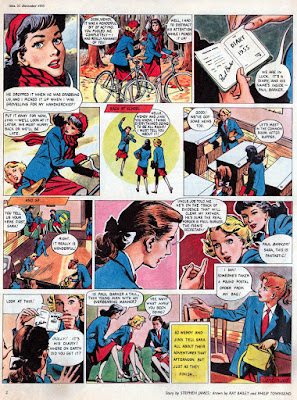 As the comic mainly featured serials, not every story had a Christmas theme. However, Susan of St.Bride's did. Presumably the lonely patient had a happy ending in subsequent chapters. Script by Ruth Adam, art by Peter Kay. (No, not the bloke off the telly.) 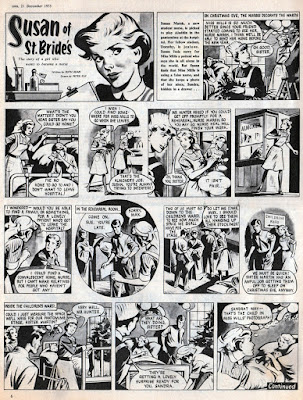 The centrespread of this issue couldn't be more festive if it tried. A Real Life Story of Franz Gruber, the composer of Silent Night (drawn by Renato Polese, written by Jenifer Callahan); Lettice's Christmas written and drawn by John Ryan (creator of Captain Pugwash); and The Journey of the Magi painted by Eric Winter. What a fantastic array of artistic talent across two pages. 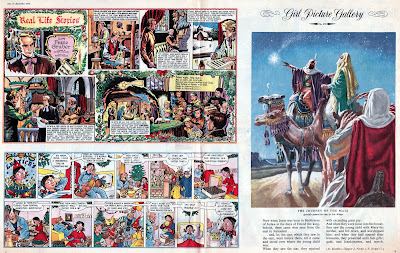 Only nine of Girl's 16 pages featured comic strips (although we still refer to it as a comic, not a magazine). The rest contained features such as this one. Different times, different meanings... 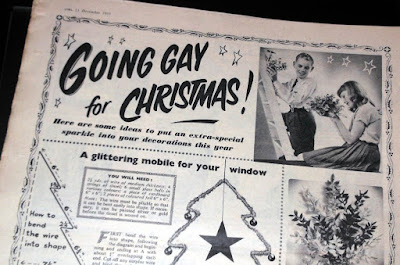 Some strips were educational, such as Cookery Corner. Here you go; a mince pie recipe for Christmas. This strip is uncredited unfortunately, but what interests me is that this sort of 1950s art style (now often called "retro") has come back into fashion, although is usually drawn with vector graphics now... 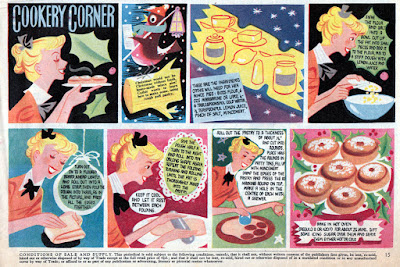 The back page strip has no festive theme but I thought I'd include it as it's illustrated by Gerry Haylock, and artist many of you will remember for his work on the Doctor Who and UFO strips in Countdown / TV Action in the early 1970s. 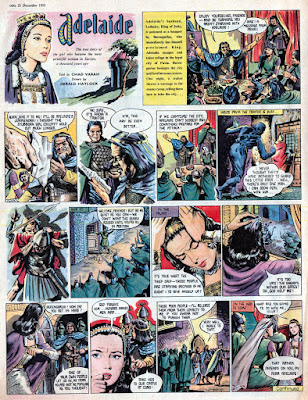 Which Christmas will the Blimey Time Machine land in next? Bookmark this blog and come back soon!
Posted by Lew Stringer at 00:30

But where was Kitty Hawke?

I am guessing the Ray Bailey here is not the same as the American artist who worked in the Milton Caniff style? He wouldn't be the first american artist to work directly for the UK. Well, actuallin 1955 he would have been the first, but you know what I mean.

It's possible, but I'm afraid I don't know.

I'm sure there must have been other American artists working for UK comics before 1955. I think some of the earliest comics in the 1890s may have featured some artists from overseas (not counting reprints).

I have a lot of Ray Bailey stuff on my blog: http://allthingsger.blogspot.com/search/label/Ray%20Bailey. In 1954/55 he must have just come off of Tom Corbett. After that he moved to doing romance and war comics for various Harvey titles and sometimes ghosting for Milt Caniff. So he may have had time for it. But his style is pretty consistant and this doesn't look like his. So who is this other guy who is mentioned with him? A penciller of an inker?

Another artist. I think they did a page each.