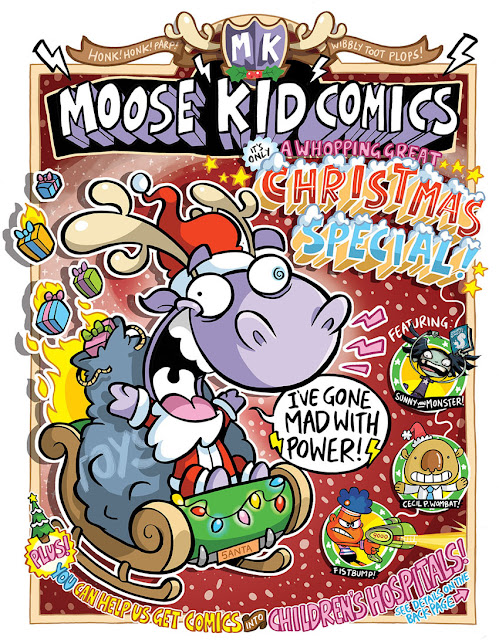 My deadlines just went mental so I hope you'll forgive me doing a cut and paste on the PR for this fantastic comic from Jamie Smart and a great team of top cartoonists. It also tells how you could help a good cause. Much respect to Jamie for his endeavours to keep children's comics fresh and alive in this country.

Moose Kid Comics, the free online children’s comic, is releasing a special festive mini-issue! Twenty-seven of the best comic artists working today have contributed to this one-off, and it’s all free to read on the website www.moosekidcomics.com.

The 16-page, full-colour special features idiotic elves, tormented Santas, snowball fights and furious food, not to mention yetis, unicorns, spaceships and culinary kittens. In other words, all the Christmas traditions! 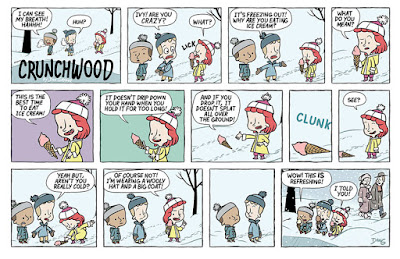 Alongside this, Moose Kid Comics have started a fundraising campaign (https://crowdfunding.justgiving.com/moosekidcomics) to help get comics into children’s hospitals, hostels, wherever they can help raise a smile. Teaming up with the charity Readathon, Moose Kid Comics hope to raise at least £2,000, which will fund the printing and distribution of Moose Kid issues 1 and 2 to children’s wards around the UK.

“One of the very first reasons we started Moose Kid Comics was to get comics to children in hospital,” says Jamie Smart, the online anthology’s editor. “It seems the most obvious plan, sharing big, wonderful, colourful comics with children who would really appreciate the entertainment.”

“My co-editor Chris suggested we do a Christmas mini-issue,” Jamie explains. “Around the same time I was wondering how we could set up a fundraiser. The two ideas just merged together, we could share the Christmas special to help promote the fundraiser.

“I approached Readathon, who are an amazing charity putting children’s books into hospitals, and they were excited about the idea of sending out comics too.”

“In this country we’ve almost lost children’s comics from the public consciousness, so this is a good place to start changing that. Sharing comics with children who might be in real need of amusement seems the best use of our craft. I’m hopeful we can reach our target, and perhaps even beat it. The more we can raise, the more good we can do with comics.” 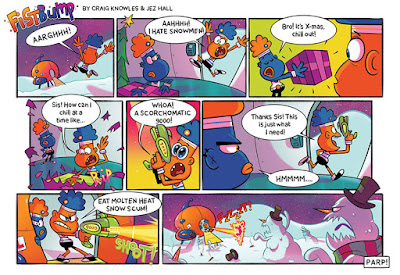 Moose Kid Comics is an annual release, aiming to showcase the talent working in comics today, as well as showing how impressive children’s comics can be. Issues 1 and 2 are both full-colour, 36-pages long and completely free to read or download from the website www.moosekidcomics.com.

“Our Christmas special features a lot of the great names from our regular issues,” Jamie says. “Including Gary Northfield, Rachael Smith, and Jess Bradley to name but a tiny few. What I love about putting Moose Kid together is how different the strips are from each other – we have comics teaching you how to bake cookies, we have photo comics, we have spoof adverts and comics about every aspect of Christmas and the festive season you could imagine!”

“We’ll be back to release issue 3 in the summer. But for now, we’re all about Christmas, and trying to do some real good with comics.” 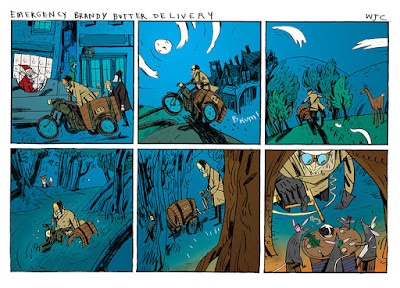 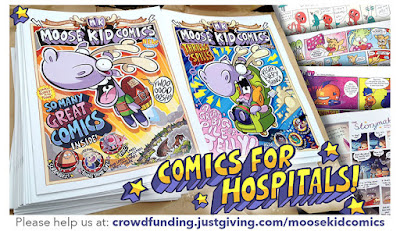 ABOUT JAMIE SMART:
Jamie Smart  has been a full time comic artist for about 15 years. He worked extensively for The Dandy, writing and drawing “Desperate Dan” for five years, before moving onto “Roger The Dodger” for The Beano. He also created “Space Raoul” for The Funday Times, “Fish-Head Steve” for The DFC, “Count Von Poo” for TOXIC, and is currently work on both “Bunny Vs Monkey” and “Looshkin” for The Phoenix.
Alongside this he has released a number of children’s books (Bunny Vs Monkey books 1 and 2, Find Chaffy 1 and 2, Where’s The Doctor), some more grown up books (Bear, Kochi Wanaba), and worked on a handful of different webcomics. He also spent some years working in show development with Cartoon Network.
Here's that address again to save you scrolling back and hunting for it:
https://crowdfunding.justgiving.com/moosekidcomics
Posted by Lew Stringer at 14:22