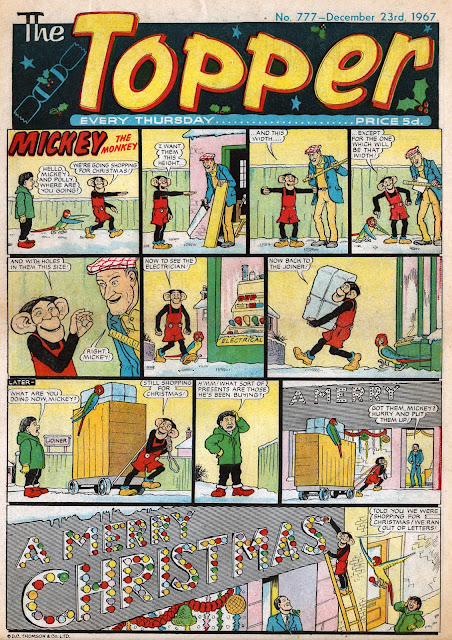 Like the "Wagon Wheels are smaller now" myth, some people misremember The Topper as a broadsheet-size comic. It wasn't as large as that, but was still a big 'un at A3 size. Here's a few pages from the Christmas edition from 1967.

The Mickey the Monkey cover strip was by the fantastic Dudley Watkins, who was then drawing at least seven pages every week for D.C. Thomson. All of which were superb examples of illustration. How did he manage that output?

Inside, Davy Law's Beryl the Peril. Another great strip... 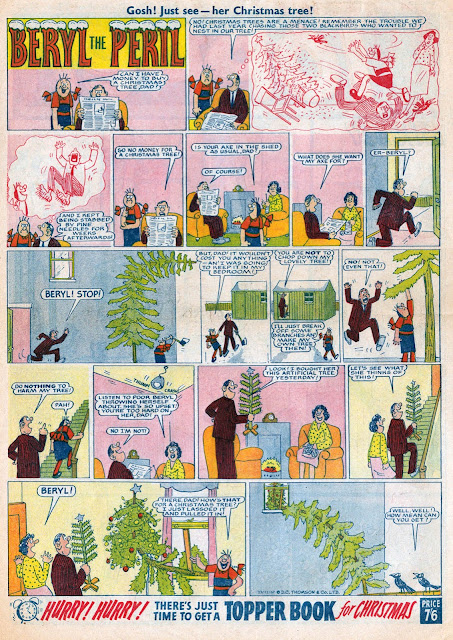 Nice to see Foxy have a happy ending for Christmas. Art by Charlie Grigg... 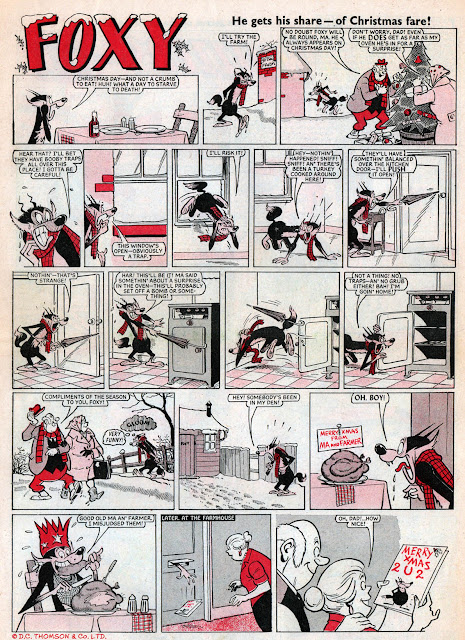 Not every strip featured a festive theme but here's another that did. The Inky-Top Imps was a sort of Famous Five type strip. Art by Sandy Calder... 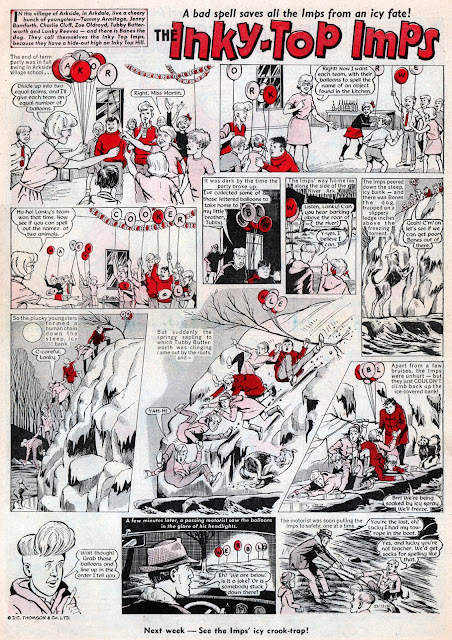 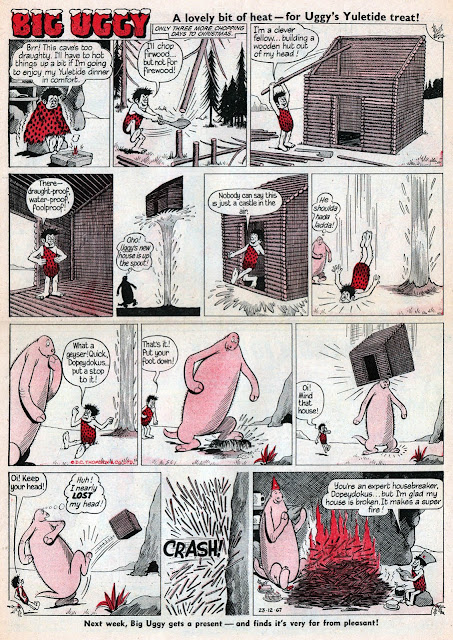 Finally, poor old Desert Island Dick isn't having much of a Merry Christmas at all. Art by Tom Bannister... 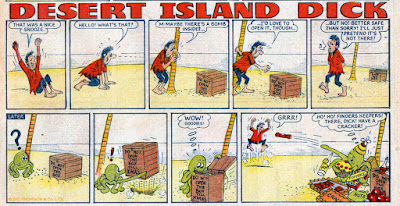 Another blog post soon.
Posted by Lew Stringer at 17:48

still good stuff.. I knew topper was bigger then normal but I didn't remember it being A3..

A3....? I have a few old TOPPERS and compared it. Broadsheet, like the Daily Mail. Definitely not A3 (which is smaller than the Beano.) Craig

Craig, you may be a bit unsure of paper sizes. A3 is twice the size of A4, so twice the size of The Beano in other words. Imagine the Beano opened up. One Topper page was the size of a Beano spread. The Daily Mail is tabloid size by the way. Broadsheet is much bigger, like the Daily Telegraph and Sunday Times.

Manic, good point about the dinosaur!

So brilliantly drawn all of it...so much care and detail..
also loved the Foxy one :)

Ahhh I remember The Topper! Was that the one that had an adventure story about
two boys and a flying car? Whiz kids or something? Whizzers? Where do you find
your scans from and can you direct me there? Please? sean

You're thinking of The Whizzers from Oz.

As for scans, this is a question I've been asked several times. May I draw your attention to the sidebar at right, which says:

"Established in 2006, BLIMEY! is a blog that looks back at classic British comics and sometimes reports on current and upcoming titles. The images of comics on my blog are ones I've scanned from my own personal collection or, in the case of some current issues, are promotional images sent to me by the publishers. I do not support 'piracy' and unlike some I do not use images from dodgy illegal comic scan DVDs.

On the rare occasion when I might use an image from elsewhere I always credit the source, and I would hope that if anyone takes images from my blog for use on their own sites they will show me the same courtesy. (It's only good manners after all.) Images are copyright their respective publishers and are only used here for review purposes."

Sadly some bloggers do nick my images and pretend they're from their own collection but more fool those who believe them.

I read the Topper and the Beezer every week from about 1972 till I started reading Marvel's Planet Of The Apes in 1974 and I remember them both being quite big - were they both A3 ? I loved Nick Kelly and Cedric but I don't remember if he was in the Topper or the Beezer.

Yes, they were both A3, until they switched down to A4 years later. Send for Kelly was in The Topper. I didn't include it in this batch because the one in this issue didn't have a Christmas theme.

Ahh a Dudley Watkins Christmas strip in colour. As I get older it takes a lot to get me in the "Christmas spirit" but this does the trick. Appreciate you taking the time to do these Lew especially as you've said previously you don't celebrate Christmas.
Coincidentally, like Colin Jones above, it was Marvel UK's Planet of the Apes reprints that started my downward spiral away from UK comics and towards US ones again for a few decades. Wonder how many more readers were sucked in that way.

Never mind the comics (good though they are), I would like some definitive proof that Wagon Wheels haven't shrunk, Lew. It is common practice amongst manufacturers and chocolate has become more expensive lately and there has definitely been a change in size amongst the bars.

So can you show it to be a myth?

Thanks Colin. Yeah, Christmas doesn't mean a lot to me these days now all my family have passed on but I still enjoy rummaging through the festive comics. Glad you enjoy them.

I think Marvel UK were a real threat to IPC and D.C. Thomson in those days. Most of the MUK comics may not have had the sales of their rivals but they were still a force on the newsstands and competed for attention from retailers and readers alike. They (and the imported US comics) definitely kept my interest in comics alive after I "grew out" of reading traditional British comics for a few years in 1975.

Yes James, we proved it back in June on this very blog. Scroll down to the last image on the following post and then read the comments:
http://lewstringer.blogspot.co.uk/2015/06/junior-express.html

Wagon Wheels are only 1/4" smaller in diameter than they were 60 years ago so not a significant difference.

Topper was bigger than A3. It was huge like the Telegraph or bigger.

The memory chests, Shane. Topper and Beezer were both A3 size, smaller than the Daily Telegraph (which is broadsheet). Go and measure one. Topper is the same size as two Beano pages.