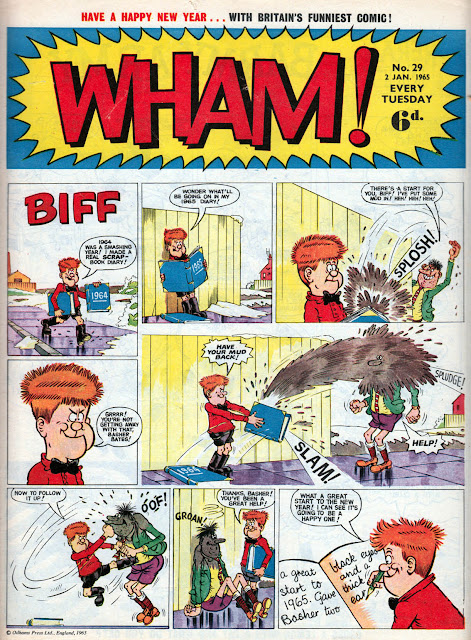 Odhams' comics didn't make much of a fuss of the New Year celebrations. Perhaps Hogmany reminded them too much of their rivals D.C. Thomson. This 1965 issue of Wham! only mentions the New Year in a couple of strips but there's some nice stuff in there so let's have a look at a few pages...

The cover strip, Biff, is by Graham Allen. A reminder of the days when kids noted their escapades in personal diaries rather than broadcasting it on social media.

Inside, the New Year is forgotten, but Kelpie The Boy Wizard by John Burns is worth showing here... 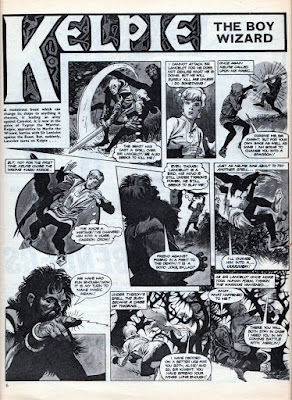 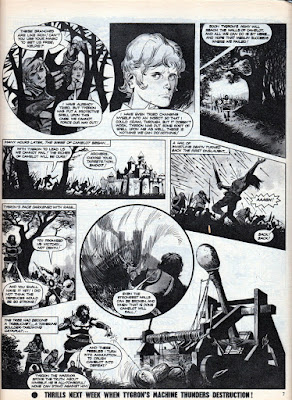 The Tiddlers doesn't mention the New Year but it is set in winter, giving Leo Baxendale an opportunity to use visual gags involving snowballs... 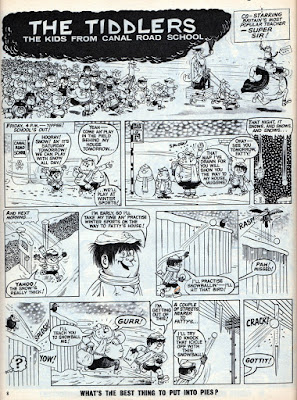 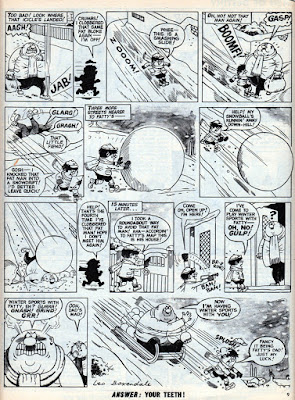 Another winter-themed strip was Billy Binns and his Wonderful Specs, drawn by Bill Mainwaring... 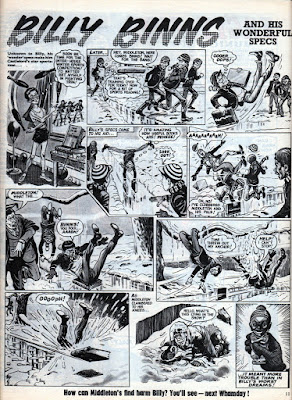 With trees in full leaf, Frankie Stein is definitely not set in the season but who can resist a strip drawn by Ken Reid? 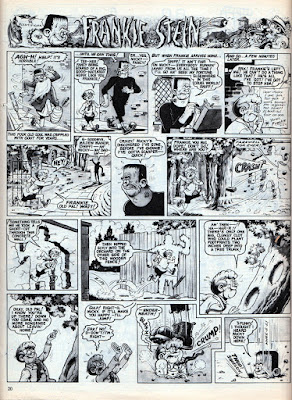 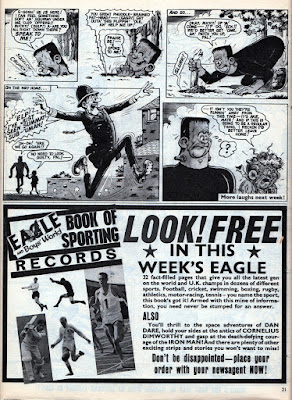 On the back page, the only other strip with a New Year theme; Footsie the Clown. I've no idea who drew it but it does the job... 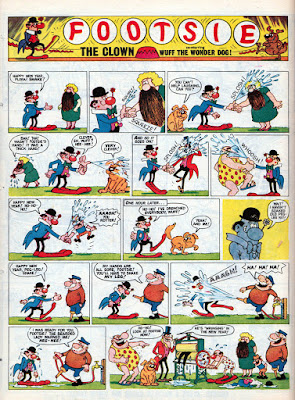 This comic was published exactly 51 years ago, and yep, it certainly feels like that amount of time has passed. A few weeks after this issue, the first editions of TV Century 21 and Sparky were published, and Smash! was still a year away. Merseybeat was influencing the music scene and later in the year Thunderbirds would arrive on TV. It was a great time to be a child!
Posted by Lew Stringer at 09:00

51 years ago that is very very scary as I think I was reading "Wham" then. Who woulda’ thunk it that 51 years later I would be reading it again via a computer that I can put in my pocket (ok my mobile phone). I have to say in some ways it does not feel that long ago to me, in other way it does as an awful lot has happened in the intervening years. Still great stuff and thanks for showing this Lew.

I think some do, Colin. Not as much as they enjoy Christmas obviously, but I remember thinking 1970 was a big deal because it was the start of a new decade. I always liked the 'newness' of a New Year, even though in reality it was just a date on a calendar.

Paul, I used to believe that "time flies" but now it all seems so very long ago. Too many things happen in life for things from years ago to still seem fresh, even though I still remember them. That's my perspective on it anyway.

For myself and any of my friends when I was a child the new year was always a big thing, the changing of the date was so exciting to us, so many possibilities as we moved slowly into the future. (Also the fact we were allowed to stay up until after midnight!) Now as an adult I rarely go out for NYE (this year is an exception but then it's only to a friend's house with a few others) but I still look forward to it. Just as I see Christmas as a time to thank and be grateful for all my friends and family, I see New Year as a new start every time, a great time to refresh ourselves, set goals and to look forward to what we can achieve.

Yes, good points, Phil. I've always felt it was a nice way to round off Christmas week, plus if course it meant more celebratory issues of some comics. (Any excuse to decorate the borders with bells and trimmings.) In my late teens and throughout my twenties it also meant a good night out around the town or wherever. And through my thirties and forties too, thinking about it. :)

Lew, I had a similar feeling about 1980 - a new decade seemed like a big deal for me too but I was nearly 14 at the time (so no longer a child) and I can't remember caring about any previous new year. Nowadays New Year just seems like another depressing reminder of mortality - people complain about the enforced jollity of Christmas but the enforced jollity of New Year's Eve is much worse in my opinion, bah humbug !

No one's forcing you to celebrate though, surely, Colin? I stayed in the last two New Year's Eves, so it wasn't a big deal for me.

Exactly, no one is forcing anyone to celebrate anything, but to deliberately take a "bah humbug" approach to Christmas or New Year (or any of the year's festivities) is only going to depress yourself. If you don't care for it just ignore it, but to enforce that kind of attitude onto yourself is only going to effect yourself in a negative way and it won't be the fault of the season.

Your comment about '1970 being a big deal because it was the start of a new decade' really resonates with me. I recall new year's eve 1969 when we were waiting for midnight to come. I'd received for Christmas a really weird multi-colour pen which could write in four different colours at the same time. I remember writing '1970' and it just looked so futuristic - it was the first time I'd seen a new decade written down. It got me thinking about the future - the year 2000 in particular. I was shocked to realise that I'd be 42 years old in that far-flung year, which was positively ancient!
I also predicted that we'd be wearing silver clothes and driving flying cars - I obviously read too may comics.

All the best for the new year
Dave

Lew, I wonder what the story was behind there being two different Billy Binns stories, illustrated by the same artist, running concurrently in two different (but same stable) comics, viz Wham and Boys' World (and Eagle for a short while when BW merged into it) - it seemed strange and unusual at the time