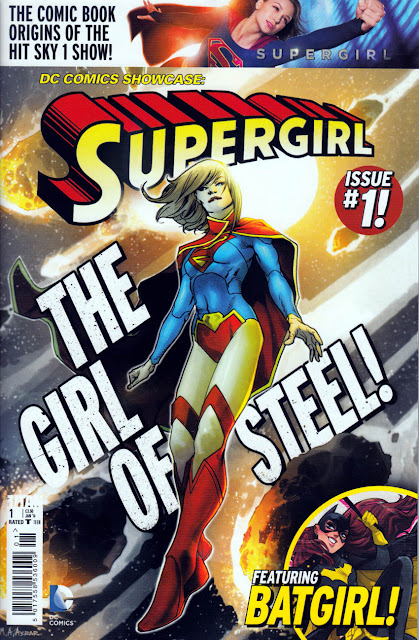 After the recent launches of The Flash and Green Arrow in their own titles, Titan Comics have just added Supergirl to their expanding line up of DC licensed British comics.

It's full title is actually DC Comics Showcase: Supergirl as the comic not only features Supergirl but also Batgirl and, from issue 2, Black Canary. The 76 page monthly presents Supergirl strips from 2011, which reintroduced the character to the DC universe, starting with her arrival on Earth. 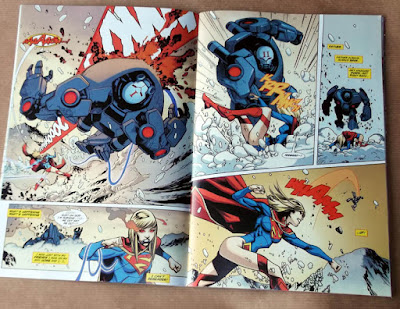 The back-up strip featuring Batgirl begins with the recent revamp of the hero (reprinted from the US edition of Batgirl No.35). There's also a pull-out poster featuring Batgirl on one side and Supergirl on the other. 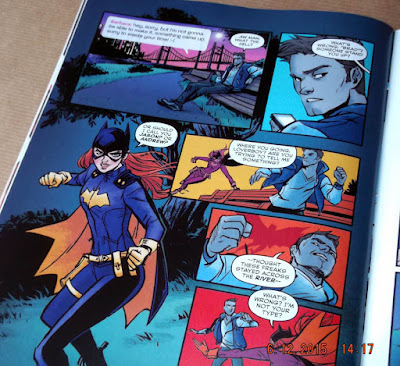 As the banner across the front cover makes obvious, this comic is hoping to capitalize on any success of the new Supergirl TV series on Sky 1. No doubt this was also the way Titan convinced the trade to stock the comic. These days, retailers expect comics to be related to a TV show, movie, toy, or game.

It's also clear that Titan are competing head to head with Panini UK now, with each company having seven superhero titles on the stands. (For the record, Panini have Mighty World of Marvel, Essential X-Men, Astonishing Spider-Man, Marvel Legends, Wolverine and Deadpool, Incredible Hulks, and Avengers Universe. Titan have Batman, The Flash, Batman Arkham, Supergirl, Green Arrow, Batman/Superman, and Justice League Trinity.)

You'll find the 14 superhero titles in WH Smith alongside the SF media mags such as SFX, Doctor Who Magazine, and MYM. While it's great to see so many comics in the shops, it's noticeable that WH Smith (the main stockists of these superhero comics) are not expanding their displays to accommodate them, so the shelves are becoming very crowded now.

Strange that DC themselves don't currently have a monthly Supergirl comic to cash in on the TV series. Titan have had to go back a few years for this one.

With the all female line up, it would seem an obvious choice to add Wonder Woman when the Superman / Batman movie opens.

@MLPasterisk, that's even more strange, as they DID have a monthly Supergirl title in the US, but it got cancelled in March this year! Maybe it wasn't selling? At least they have 40 issues of content to use, which will last them a little over three years.

Yes, it was low sales that saw off the Supergirl comic. Perhaps they'll revive it if the TV series is a success. It doesn't necessarily mean that the viewers will buy the comic though.

Given this is Titan I will be surprised if it lasts 5 issues. I really don't get why they didn't push this with advertising in there other titles. I only get Batman Arkham so I could be wrong but there was no mention of it in there. Still I hope succeeds!!!

It's advertised in Doctor Who Comic and the latest Flash, and will be advertised in the others no doubt. I get the impression it was rushed out after last month's Batman Arkham went to press so that might be why it wasn't advertised there.

I was very critical of Titan and their DC range in another post. I won't be now. :)

I *love* Supergirl. Best of luck to this title. I'm really enjoying the series; I think, despite its flaws, the 1984 movie has something going for it (it had a lovely fairytale quality to it); and I do think Supergirl has proven very popular since her debut (was it 1959 or 1960?).

If there's one Titan title I really want to see succeed, it is THIS one!